[Editor’s Note: This seems like great news. I wonder how many of these ‘new’ jobs were a transition from the illegal cannabis market? Now they’re getting payroll taxes taken out!]

How many jobs are there in the legal cannabis industry? It’s a common question—and one the government refuses to answer.

Because cannabis remains federally illegal, employment data agencies such as the Bureau of Labor Statistics ignore all jobs related to the industry.

Legal cannabis is the greatest job creation machine in America. Our employment data proves it.

That’s too bad, because they’re missing one of the most dramatic job booms in recent history.

Over the past three months Leafly’s data team, working in partnership with Whitney Economics, has gone state-by-state to tally the total number of direct, full-time jobs in the state-legal cannabis industry.

There are now more than 211,000 cannabis jobs across the United States. More than 64,000 of those jobs were added in 2018. That’s enough people to fill Chicago’s Soldier Field, with 3,000 more tailgating outside.

Legal cannabis is currently the greatest job-creation machine in America. The cannabis workforce increased 21% in 2017. It gained another 44% in 2018. We expect at least another 20% growth in jobs in 2019. That would represent a 110% growth in cannabis jobs in just three years.

Special Report: 2019 Cannabis Jobs Count is available only at Leafly. The main report offers a national overview of direct employment as well as indirect positions and jobs induced by the legal cannabis industry. We also offer data about tax revenue in legal states, growth predictions for 2019, salary ranges for the most in-demand cannabis jobs, and tips on getting hired. The report’s appendix offers a state-by-state analysis of market size, growth, and job numbers. 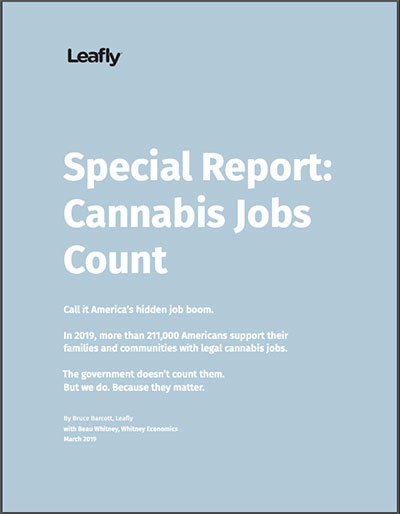 Growth Compared to What?

The Bureau of Labor Statistics recently compiled a list of the industries with the fastest-growing employment figures. Opportunities for home health care aides are expected to grow 47%. Openings for wind turbine technicians are expected to increase 96%. The need for solar voltaic installers is expected to grow 105%. Those gains are projected to happen over the course of 10 years.

Here’s the incredible thing: The 110% growth in cannabis jobs will have happened over just three years.

Federal job counters won’t tell you that. We just did.

These States Are Booming

Some states that have had legal adult-use cannabis sales for a while now—Colorado and Washington opened their stores in 2014—are just now seeing the growth in cannabis jobs start to plateau.

Meanwhile, newly legal states, such as Florida (medical) and Nevada (adult use), are experiencing cannabis job booms with eye-popping gains: 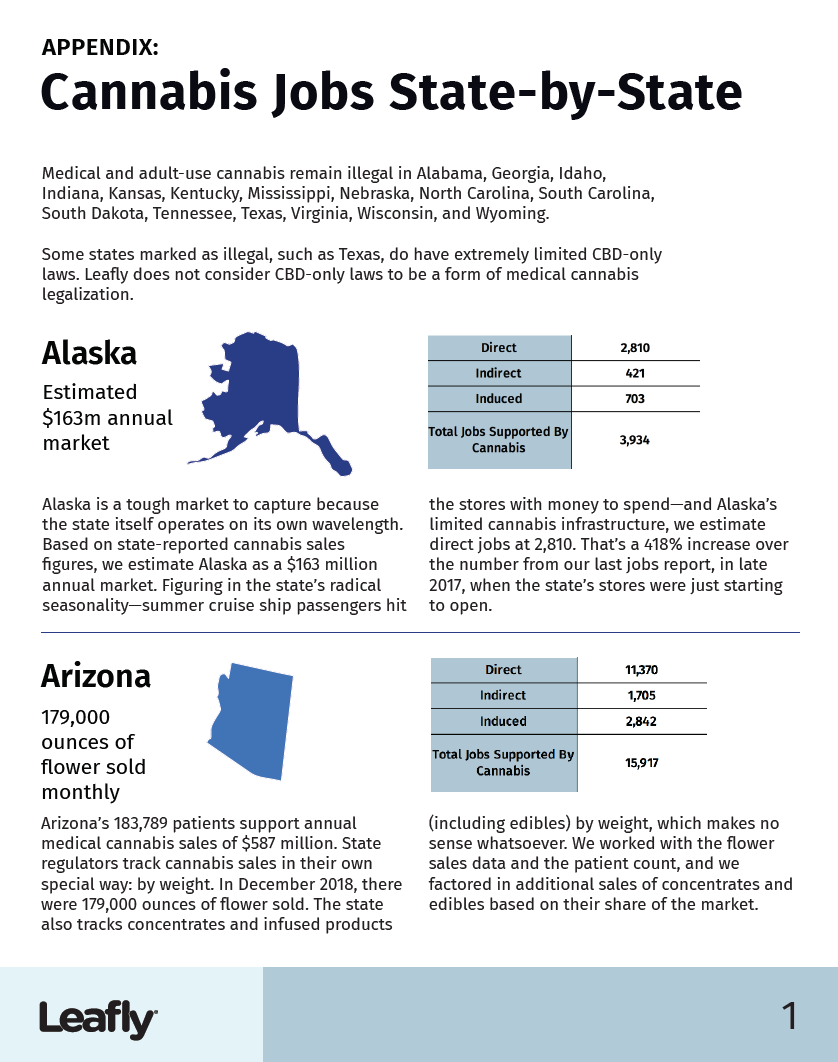 California, Massachusetts, Oklahoma, Florida, and Arkansas are seeking talent—and they need it now.

How to Land a Job