[Canniseur: It’s fabulous to read about women provocateurs from our history. Weed has been a part of world history. It’s great to hear stories about how cannabis was a part of the equality revolution.]

With the support of organizations like Women Grow and the constant inspiration of cannabis industry powerhouses like Jane West and Dr. Lakisha Jenkins, it’s no wonder women are pioneering the legal cannabis industry. It’s been reported that it could be the first billion-dollar industry dominated by women.

There’s never been more cannabis art to swoon over, either. From Instagram to Etsy to Amazon, creative women continue to produce gorgeous tributes to cannabis and to those who enjoy the plant’s benefits.

Perhaps unsurprisingly, cannabis-loving women writers are publishing more books than ever about women and weed, including Feminist Weed Farmer by Madrone Stewart and Tokin’ Women by Nola Evangelista.

But it turns out that influential and creative women have been writing about cannabis for centuries. From Hildegard von Bingen to Louisa May Alcott to Maya Angelou, women writers have been infusing cannabis into their work since before Columbus and his men invaded the Americas.

Here’s seven women writers from history who wrote about cannabis with fondness.

Hildegard von Bingen might be the raddest nun you’ve never heard of. Supposedly experiencing visions since childhood, she started pursuing a religious life at age 15. She became the first nun in recorded history to write about consuming cannabis.

In Physica, the German abbess, writer, composer, and visionary mystic writes about the medical benefits of cannabis, citing the plant as an effective pain reliever for headaches and as a poultice to treat wounds.

She also wrote about prophetic and apocalyptic ideas on topics like the church, redemption, and the relationship between God and humanity, plus dozens of lyric poems and two treatises on medicine and natural history.

Hildegard von Bingen wasn’t officially declared a saint until 2012, but a biographer proclaimed her a saint and miracles were supposedly reported during her life and at her grave.

An ancestor of Kate Middleton, Duchess of Cambridge, Harriet Martineau was a trailblazing essayist, novelist, journalist, and economic and historical writer. Martineau embraced atheism at a time when most English folks didn’t, and she was an active member of the abolitionist movement when it was unpopular.

Martineau helped found the beloved genre of “the school story” when she published The Crofton Boys in 1841, and she pioneered “back to the land” journalism with her writings about her garden in England’s Lake District.

As a woman who spent the majority of her life breaking barriers and fighting for social and economic justice, it’s no wonder Martineau was cool with cannabis, most notably, in her memoir, Eastern Life Present and Past, in which she writes an account of enjoying cannabis in a harem during her travels in the Middle East.

You probably know her from Little Women and its sequels, but Louisa May Alcott wrote some pretty incredible short stories about cannabis as well. “Perilous Play” tells the tale of two would-be lovers getting lifted and lost in a boat, and then inexplicably ending up engaged.

In the story, one character explain the effects to another: “A heavenly dreaminess comes over one, in which they move as if on air. Everything is calm and lovely to them: no pain, no care, no fear of anything, and while it lasts one feels like an angel half asleep.” Even better, the story ends with: “Heaven bless hashish, if its dreams end like this!”

And like a lot of cannabis consumers, it seems Alcott might have experienced one or two unfortunate freak-outs while high. In “A Modern Mephistopheles,” Alcott’s heroine takes an infused candy and finds that “an inward excitement possessed her, a wild desire to sing her very heart out came over her, and a strange chill which she thought a vague presentiment of coming ill, crept through her blood.”

While we can’t say for certain if Alice B. Toklas maintained her own personal stash, it’s safe to say she endorsed cannabis. She published The Alice B. Toklas Cookbook in 1954, eight years after the death of her lifelong partner, writer Gertrude Stein. She included a now-infamous recipe for a Moroccan cannabis confection made with dried fruit, nuts, and spices.

Although Toklas is widely credited with creating the dish, the recipe was reportedly contributed to her cookbook by one of her many creative friends, writer and avant-garde artist, Brion Gysin. (Apparently, Toklas kicked it with F. Scott Fitzgerald, Ernest Hemingway, and Pablo Picasso on a regular basis as well.)

In an interview on Pacifica Radio in 1963, Toklas said she included the recipe in her cookbook without realizing that cannabis was the highlight of the dish. But her description of the infused dessert tells another story: “This is the food of paradise. Euphoria and brilliant storms of laughter; ecstatic reveries and extensions of one’s personality on several simultaneous planes are to be complacently expected.”

American publishers wouldn’t include the controversial recipe in the book’s first edition, but a second edition containing a hashish fudge recipe was published in the US in the early 1960s. The dish was instantly embraced by hippie culture and referenced in the 1968 film, I Love You Alice B. Toklas.

The Danish writer who penned the classic memoir-turned-Hollywood film Out of Africa (1985) was born Karen Blixen, but she’s more widely known by her pen name, Isak Dinesen. Dinesen’s finely crafted short stories, set in the past and infused with gothic supernaturalism, incorporate the themes of eros and dreams.

In Out of Africa, Dinesen wistfully recalls her years owning and operating a coffee plantation in Kenya, until mismanagement, drought, and the falling price of coffee forced her to return to Denmark. According to a book on her life, Isak Dinesen: The Life of a Storyteller, Dinesen’s plantation was just one of the places where the writer and her companions “liked to experiment with the sensations hashish, opium, or miraa could give them.”

She also wrote numerous essays and a novel, The Angelic Avengers, under the pseudonym Pierre Andrézel. She apparently hung out with Marilyn Monroe, Arthur Miller, Timothy Leary, and Aldous Huxley for a while too.

In a letter to her mother in 1924, she wrote: “The greater part of humanity needs excitement, some slight intoxication, pleasure, and danger too. I think that if it were in my power to do anything at all for humanity, I myself would like to amuse them.”

As an iconic poet, dancer, actor, civil rights activist, and award-winning author of I Know Why the Caged Bird Sings, Maya Angelou wasn’t known for keeping her opinions to herself—including her thoughts on cannabis.

The celebrated novelist wrote extensively about her relationship with cannabis in her second autobiography, Gather Together In My Name. While detailing her first time taking cannabis at a dinner party, Angelou recalls, “The food was the best I’d ever tasted. Every morsel was an experience of sheer delight. I lost myself in a haze of sensual pleasure, enjoying not only the tastes but the feel of the food in my mouth, the smells, and the sound of my jaws chewing.”

The writer reportedly enjoyed the plant’s many benefits in a variety of ways, whether having dinner with her mother or taking a long walk.

An intellectual, a mother, and a sexually progressive woman who competed with men for bylines in the 1960s, Susan Sontag challenged all kinds of traditional norms. The Harvard alumni had a private relationship with renowned photographer Annie Leibovitz for a time, and won the National Book Award in 2000 for her novel In America.

Sontag also published the play Alice in Bed, as well as several nonfiction works like Illness as a Metaphor and Where the Stress Falls before passing away in 2004. On top of that, she reported on many of the issues and conflicts that plagued her generation, such as the Vietnam War, the AIDS epidemic, and the Bosnian War.

Perhaps unsurprisingly, the author, journalist, playwright, and native New Yorker was also pro-cannabis. In an interview with High Times, Sontag said: “I think marijuana is much better than liquor. I think a society which is addicted to a very destructive and unhealthy drug—namely alcohol—certainly has no right to complain or be sanctimonious or censor the use of a drug which is much less harmful.” 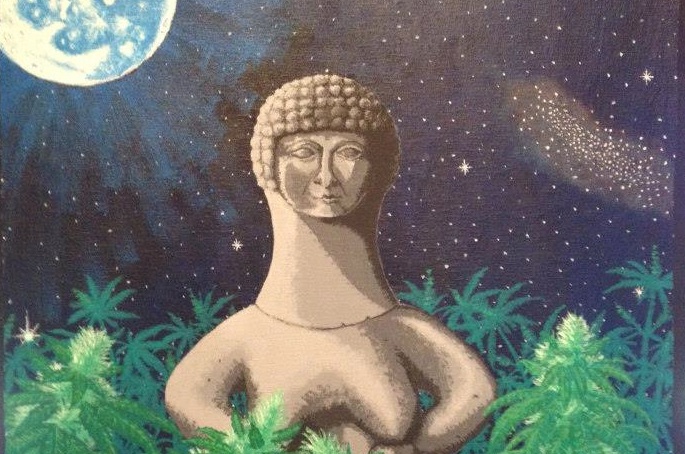 The Mother Plant of the Goddess – Cannabis