What to do With Weed Leaves? Deep Fried Marijuana Leaves Introduced by a Restaurant in Los Angeles

One restaurant that is featuring deep fried marijuana leaves has finally answered the age old question of what to do with weed leaves. Shibumi is a sushi restaurant which is based at 815 S Hill St, Los Angeles.

In April, during the 4/20 celebration, they introduced their new menu item, deep fried marijuana leaves, which to most stoners dismay are not supposed to give its consumers the “high” but they are expected to feel the cooked herb’s soothing effect.

So far, the very secluded restaurant has created a buzz over their unique menu items,

Chef and owner, David Schlosser, explained that the leaves, which are purchased from THC Design, do not contain any form of Tetrahydrocannabinol (THC), the primary psychoactive component in the cannabis plant.

THC Design is the leader in premium cannabis cultivation with an estate grown, single-sourced flower provides consistent quality across a wide spectrum of brands.

Schlosser assures that the leaves used only have cannabidiol (CBD,) the chemical composition of cannabis that is used in most cannabis-based medicines.

The fried marijuana could easily be turned into a dish that gets people high if infused with THC cannabis oil but the chefs chose otherwise.

Yes, the cannabis leaves are edible, but this is extremely unusual because most of the time edibles are something with weed in it, not the plant itself.

Shibumi has decided to do something different by serving up whole cannabis leaves which are fried in a tempura batter and are topped with CBD salt.

Joe Avella of Stoney Baloney told LA Insider that the tempura batter for the marijuana leaves is phenomenal.

There is the possibility that the dish could be the ultimate stoner’s delight as you could use THC-infused cannabis oil to create the deep fried marijuana leaves. It is possible that the chef could make any type of THC-infused dipping sauce under the sun and it would add flavor and the edible experience.

David Schlosser worked in some of France’s finest and most demanding kitchens before he moved to Los Angelos and opened Shibumi.

Shibumi is a very small and quaint restaurant with 40 seats but has made a name for itself since opening last summer.

So far, it has been ranked by Jonathan Gold of the LA Times, as his No.2 restaurant in Los Angelos and eater’s critic Bill Addison gave them a glowing review.

“Shibumi Is the Future of Japanese Dining in America.”

Shibumi’s is a finessed Japanese cuisine, and it is known for its fresh ingredients and for its open bar atmosphere.

Schlosser swears that he is not doing anything new or different, these types of restaurants are very common in Tokyo.

“I’m not doing anything new, you know. These kinds of restaurants are common in Tokyo. But we want to do it right.”

Schlosser is set on productivity, as he is in the process of expanding by building out a back room for intimate kaiseki meals and planning a lunch menu to debut later this year. 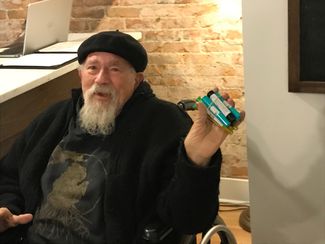