Estimated read time for you to get up to speed: 6 minutes.

Here’s a look at where the winners of this week’s primary elections in four states stand on marijuana law reform.

A California district attorney told President Trump during a meeting on immigration policy that the state’s legalization of marijuana has led to more illegal cultivation on public lands.

Congressman Ro Khanna (D-CA) tweeted, “Black and Hispanic citizens are arrested at a much higher level than white residents in marijuana-related incidents even though these communities have been found to use marijuana at similar rates. This flagrant racial discrimination must end.”

The U.S. Senate hemp legalization bill got one new cosponsor, for a total of 19.

The U.S. House bill to deschedule marijuana and withhold funding from states with discriminatory enforcement got two new cosponsors, for a total of 37.

Pennsylvania Gov. Tom Wolf (D) tweeted, “Because so few doctors have access to medical marijuana to study its treatment potential, Pennsylvania’s clinical research program will serve as a model to the nation in developing new and innovative treatment options for patients who are suffering.”

Efforts to pass a medical cannabis bill through the Missouri legislature ended after marijuana language was removed from a larger healthcare omnibus bill. [Via a source]

A Florida judge heard a case seeking to overturn the state’s ban on smoking medical cannabis. Separately, the state Supreme Court is asking the regulators to file a response to a lawsuit on patients’ rights to grow their own marijuana.

Nevada Attorney General Adam Laxalt, a gubernatorial candidate, is being accused by the Nevada Democratic Party of not doing more to defend the state’s marijuana law because of campaign contributions from prohibitionist casino billionaire Sheldon Adelson.

Supporters and opponents of Utah’s medical cannabis ballot measure are battling over confusion about when the deadline to turn in signature removal forms lapsed.

West Virginia lawmakers are pushing to enact a fix to medical cannabis businesses’ banking access issue during a special session.

Ohio regulators awarded an additional provisional medical cannabis cultivation license to a company whose application was initially rejected due to a scoring error.

Louisiana lawmakers approved legislation to expand the medical cannabis program. Gov. John Bel Edwards (D) dodged a question about whether he would sign the bills, and said he opposes legalizing marijuana. Separately, a medical cannabis pharmacy applicant is suing regulators for awarding a license to a lower-ranked competitor.

California’s insurance commissioner hosted a webinar on the unique insurance needs of the cannabis industry.

A Colorado senator says he trusts President Trump not to interfere with the state’s marijuana laws.

Activists are asking why Pittsburgh, Pennsylvania marijuana arrests are rising following the enactment of a decriminalization ordinance.

Thailand’s cabinet approved legislation to allow medical use of cannabis and other drugs.

A local government in Estonia approved using a flag with a cannabis leaf image after people in an online poll overwhelmingly voted for it.

Kevin Sabet of Smart Approaches to Marijuana is billing his prohibitionist movement as “the resistance.”

270 Strategies’s Jeremy Bird, who served as field director for Barack Obama’s 2012 reelection campaign, tweeted, “legalizing marijuana is not some extremist view anymore. It’s just the right thing to do for criminal justice reform, for our economy.”

A study concluded, “Among children and adults with the Lennox–Gastaut syndrome, the addition of cannabidiol at a dose of 10 mg or 20 mg per kilogram per day to a conventional antiepileptic regimen resulted in greater reductions in the frequency of drop seizures than placebo.”

A study found that “driving stability was significantly impaired after THC, both in simulated and real driving conditions.”

A study concluded that “state implementation of medical marijuana laws between 2004 and 2012 was associated with a 4.72% point increase in the probability that young adults perceived no/low health risk related to marijuana use.”

Snoop Dogg said that Tupac and Madonna brought him a big bag of marijuana when he hosted Saturday Night Live in the 1990s.

Actress Hilary Duff is in a dispute with her neighbor over his alleged frequent marijuana smoking.

The Onion riffed on the recent U.S. Supreme Court ruling striking down a federal gambling prohibition:

An item in Wednesday’s newsletter about a federal judge sentencing Detroit-area men to prison in a scheme to pay bribes for approval for a medical cannabis dispensary contained the incorrect link. 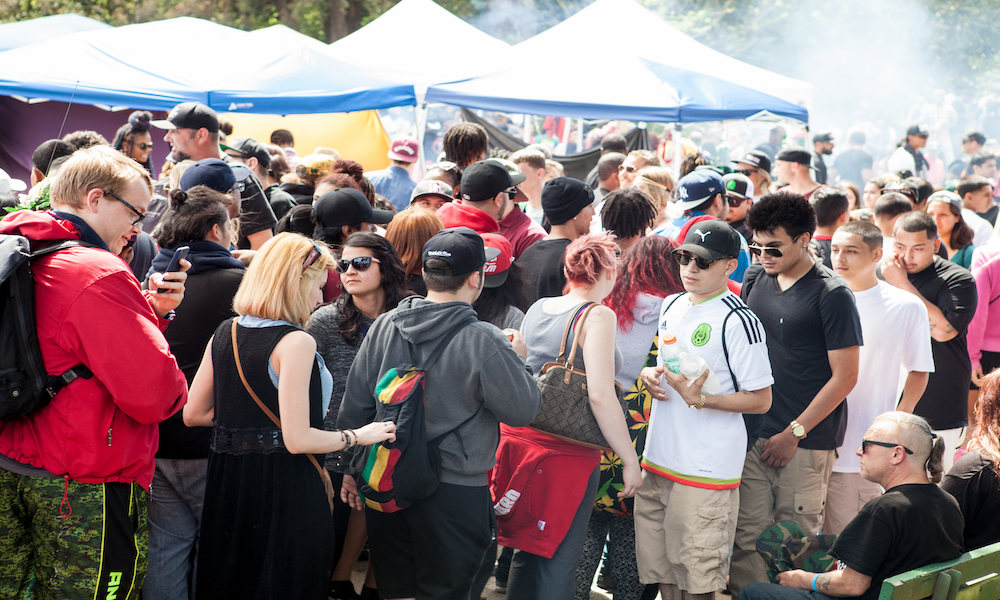