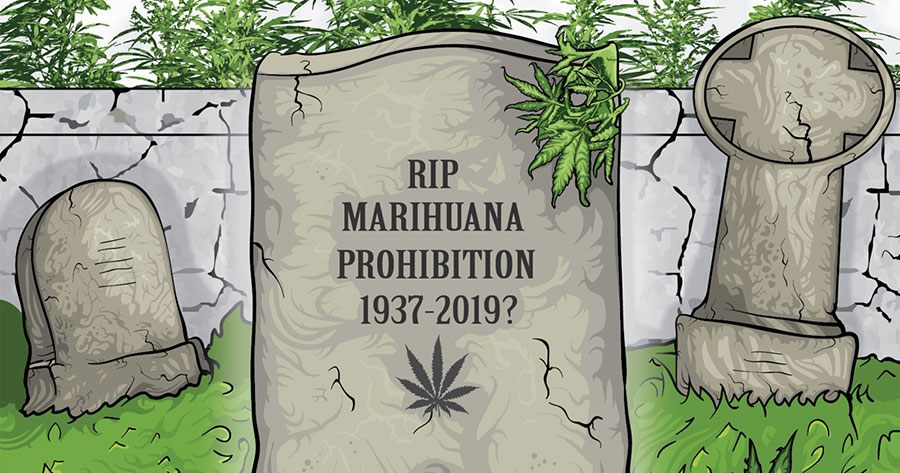 [Editor’s Note: Legal cannabis in U.S. could happen fast with a little more support from the right. Here’s a great plan on how to go about it.]

Could 2019 sound the death knell for marijuana prohibition as we know it in America? Will more states legalize the noble weed before year’s end? Can the federal government actually get out of its own way and allow the full flowering of legal cannabis commerce in the nation and around the world? Will the foreign abandonment of prohibition in favor of legalization push the U.S. to finally end its Draconian policy?

These are important questions to ask while we barrel ahead as a movement and industry. There are two primary reasons why 2019 could actually top 2016 as cannabis’ most significant year of reform ever:

The way states will end their prohibition regimes, and the fact that for the first time in the era of legalization (starting when Colorado and Washington voters legalized it in 2012) Democrats have control of the U.S. House of Representatives.

It’s well within the realm of political possibility that soon a Democratically-controlled House will pass legislation that effectively ends federal cannabis prohibition.

With Canada fully ending cannabis prohibition last year (following Uruguay’s lead) and soon Mexico, dozens of countries around the world are currently passing medical access laws, attracting tens of billions of dollars in domestic investments from around the globe and creating an unprecedented socio-eco-political squeeze on the U.S. government to alter its policy.

Here are some more questions to ponder: Will 2019 be the year state legislatures join the fray against federal cannabis prohibition? Will necessary changes in political leadership at the national level in Congress open the door for affirming federal legislation? Will a concerted and resourceful federal lobbying effort pay dividends?

The Dawn of Voter Initiatives

Historically speaking, most all substantive cannabis law reforms in America since 1996 have happened because of the efforts of reform organizations like NORML, Drug Policy Alliance and Marijuana Policy Project. They helped get state initiatives that asked voters whether or not they want to keep enforcing marijuana laws or instead tax and regulate the substance similar to alcohol and tobacco products on the ballots.

After numerous electoral defeats at the ballot box from the early ’70s to the early ’90s, California voters surprised the state (and nation) in 1996 with the passage of Proposition 215, which legalized medicinal marijuana; it was the first such state law in the country. For the next seven consecutive two-year election cycles, from 1998 to 2010, activists placed more than a dozen marijuana measures on state ballots, with a mix of successful medical initiatives and unsuccessful legalization measures like California’s Prop 19 in 2010.

State Legislation Is the Key

Traditionally, most U.S. state laws are derived from legislation, not binding voter initiatives. That’s why 2010 was so significant in the history of cannabis legalization in the United States. For the first time, significant law reforms happened at the legislative level when New Mexico and Colorado state representatives passed medical legislation that put their states in clear conflict with existing federal law by allowing for the regulation and taxation of marijuana products.

Since 2010, numerous state legislatures have passed pro-medical cannabis bills and governors have readily signed them into law (i.e., Rhode Island, Connecticut, New Jersey, Illinois, Minnesota). The only state legislature to pass an adult-use measure is Vermont in 2018, but it timidly opted to not set up a legal industry.

Advances for recreational legalization have primarily been limited to binding ballot initiatives. From 2014 to 2018, voters in Alaska, California, Maine, Massachusetts, Michigan, Oregon and Nevada elected to end cannabis prohibition.

This will likely be legislative legalization’s breakout year. Remarkably, the Connecticut, Illinois, New York, New Jersey, Rhode Island and Vermont legislatures are all poised to pass marijuana legalization bills (in Vermont’s case, it will add onto its current law) and send them to governors who’ve already indicated a willingness to sign pro-reform measures. It seems likely, too, that legalization will once again be on an upcoming ballot in Arizona, where an  initiative barely lost in 2016.

The next epoch of cannabis legalization—buttressed currently by national polling indicating an eye-popping 66% of public support—is largely going to happen in legislative bodies rather than by asking citizens to cast “yea” or “nay” votes.

For the last eight years or so, the single one-word reason for why the federal government’s marijuana policy is so out of step with states legalization efforts has been: Republicans.

With a gaping, 30-point difference separating Democratic support for ending cannabis prohibition and Republican opposition (65% to 35%) and with Democrats’ support for legalization almost in perfect synch with general national polling data, only changes in political leadership (or Republicans immediately ceasing their Reefer Madness ways) can steer the country away from a public policy that even incoming Attorney General William Barr says is “untenable and has to be addressed.”

The recent change from Republican to Democratic leadership in the House of Representatives as a result of the 2018 midterms redounds positively for the prospects of federal cannabis law reform.

After years of Republican control of Congress’ political agenda, notably led by aggressively anti-marijuana committee chairman who bottled up dozens of sensible (and otherwise bipartisan supported) cannabis bills—ranging from allowing veterans access to medical marijuana to criminal justice changes and banking reforms—Democrats in control of the gavel are now in a prime position to advance numerous measures through the applicable subcommittee, committee and even House floor votes.

With 10 states having already legalized cannabis and a half-dozen more poised to soon join them via legislation (two are national bellwethers, New York and Illinois), and 32 states with medical access, hundreds of members of Congress represent states that have effectively ended prohibition. Led by an ever-growing “Cannabis Caucus,” it’s well within the realm of political possibility that soon a Democrat-controlled House will pass legislation that effectively ends federal cannabis prohibition.

Going back to that pesky Republican support for prohibition, despite whatever progress the House makes on any pro-pot bills, the Senate, in the hands of Republicans, can indefinitely stall such legislation. To date, GOP leadership has chosen to largely ignore cannabis measures.

This could change. The initial wave of states that legalized marijuana via voter initiatives were almost entirely represented in the Senate by Democrats (save for Alaska’s Lisa Murkowski, Colorado’s Cory Gardner, Maine’s Susan Collins and recently defeated Dean Heller of Nevada, who was replaced by pro-pot Democrat, Jackie Rosen). The anticipated second wave of legalization states via legislation will largely be propelled by Democrats. It’s anticipated that as state legislatures start passing legalization measures, more Republican representatives, senators and governors will likely cross the aisle and vote for cannabis reform.

All of which creates clear and obvious political pressure on Republicans in Congress, the party’s political apparatuses and its popularity with rank and file voters to logically accept cannabis legalization’s inevitability at the state and, more importantly, federal level.

What’s the rational alternative for Republicans? To strongly advocate for marijuana’s continued illegality and the tax-wasting government bureaucracies’ feckless application of an already well-proven unenforceable and socially unpopular policy?

The Republican National Committee should look to red states like Oklahoma for guidance after state legislators there pretty clearly got the message from citizens last June after they overwhelmingly approved a voter initiative that allows medical access to cannabis products, resulting in state regulators issuing more than 2,100 cannabis business licenses by year’s end. Up until last year, Oklahoma had the most repressive marijuana laws in the country. Now, a medical industry is being established.

Cannabis prohibition at the federal level might have enjoyed a brief political revival under a Trump administration that was outwardly hostile to marijuana (think Richard Nixon or Ronald Reagan). He’d installed a hardcore drug warrior in Attorney General Jeff Sessions, but after a lot of bluster, Sessions didn’t accomplish much and was soon banished from the Cabinet.

To the chagrin of anti-marijuana advocates and law enforcement, President Trump has largely practiced “benign neglect” as his preferred marijuana policy, saying and doing virtually nothing about the 81-year-old federal prohibition.

Barr, a previous card-carrying drug warrior in the George H. W. Bush Administration as attorney general, has strongly signaled, in writing to U.S. senators from states with legal cannabis, that under his tenure as the nation’s top law enforcement official he will respect state’s rights in regard to cannabis.

Let’s face it, long opposed to legalizing marijuana, Republicans are now making moves in the burgeoning industry. When hawk, like former Speaker of the House John Boehner, signs up as a board member of a large cannabis company (Acreage Holdings), which he did last year along with former Canadian Prime Minister Brian Mulroney, you know the tide is turning.

Another good 2018 sign was Senate Majority Leader Mitch McConnell’s support of the Farm Bill, which led to legalizing hemp. McConnell may ultimately benefit financially from that (McConnell Hemp anyone?), but like people often say, the cat is out of the bag.

Marijuana prohibition in the U.S. appears to be coming to an end. Will it happen in 2019? With full Democratic support and more and more Republicans recognizing that it’s better to join the majority rather than continue to stonewall, significant changes are on the horizon. 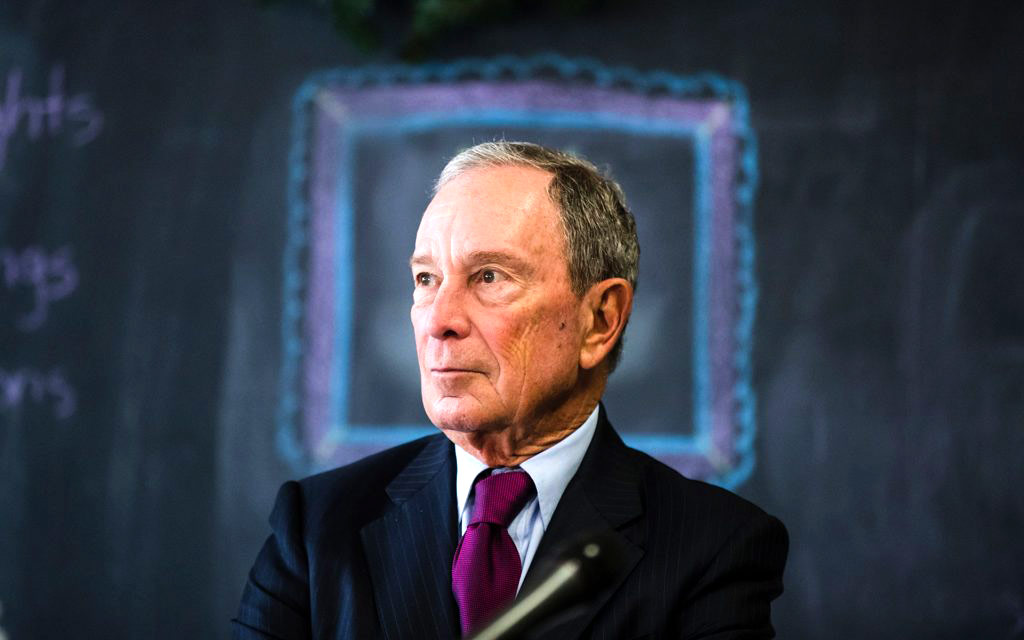 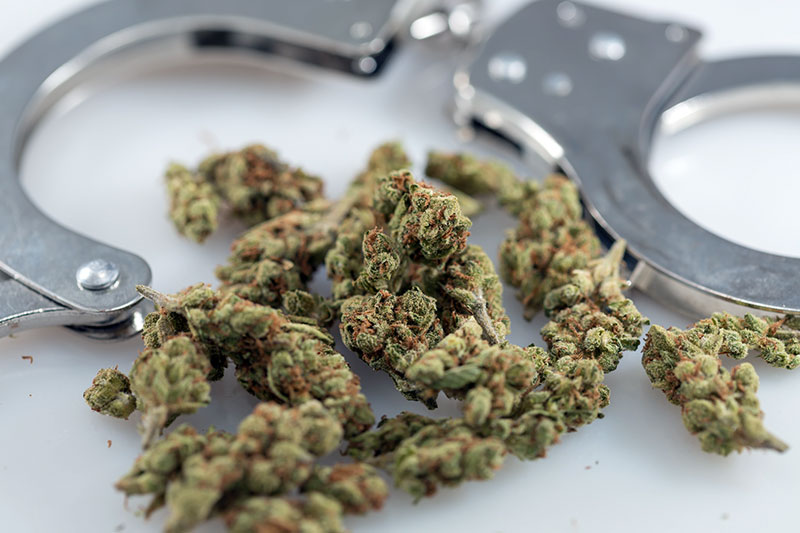