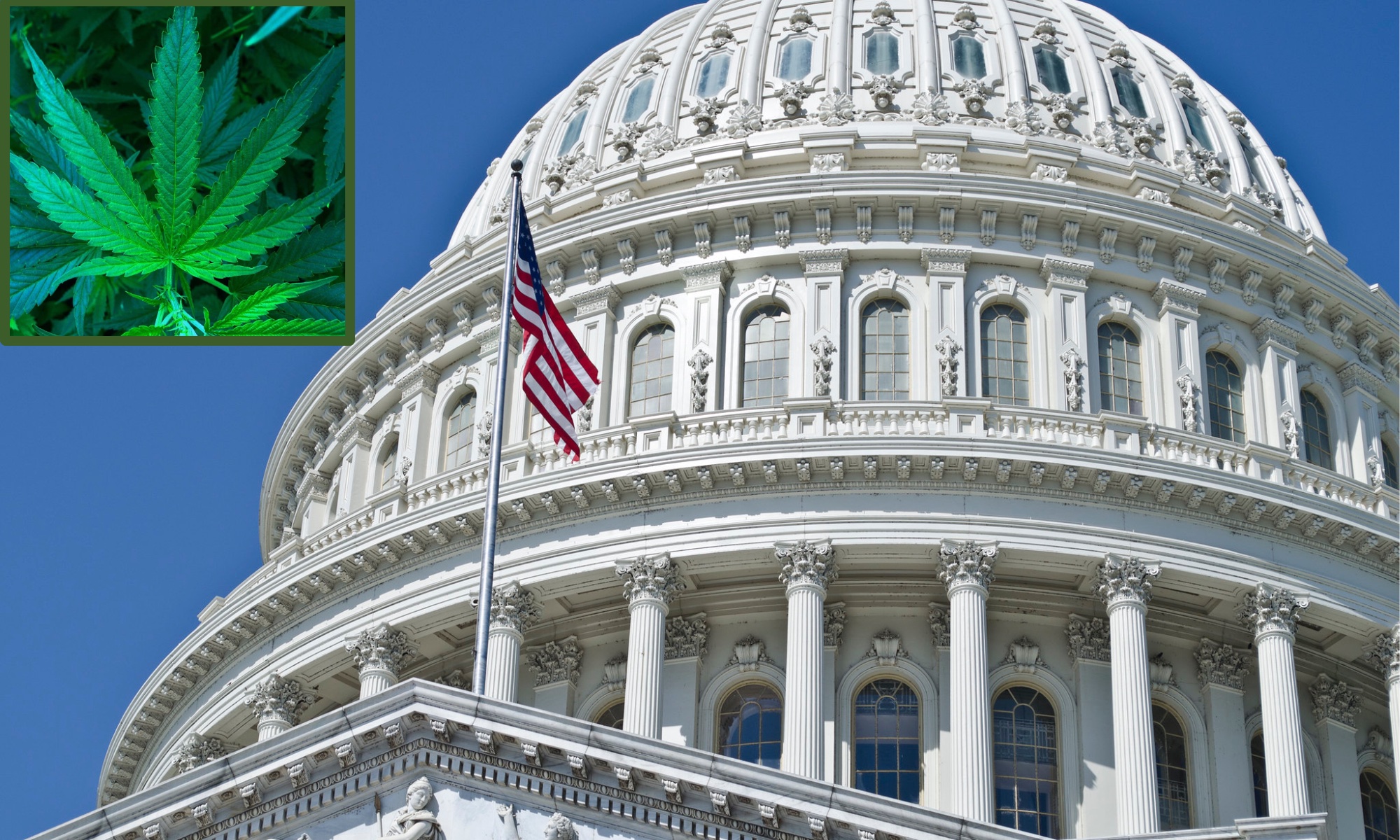 [Canniseur: Who is this guy? Actually, we know. And we know he’s a dinosaur. He’s a dinosaur who admits he’s not listening to his constituents. He’s listening to arguments from the 1960s. The arguments he’s presenting go beyond specious and he’s demonstrating he doesn’t know how to not conflate causation with correlation. We’re getting tired of this. We’re all getting tired of this.

The second highest ranking Democrat in the U.S. House of Representatives wrote on Monday that he remains wary of supporting the legalization of marijuana because he believes it is a gateway to “harder, very harmful drugs.”

In the letter from Majority Leader Steny Hoyer (D-MD), which was shared with Marijuana Moment by a constituent of the congressman, the top Democrat cited his record of embracing more modest cannabis reform proposals but stopped short of pledging to back adult-use legalization.

“I support the legalization of medical marijuana, as I am aware that it does have an ameliorating effect on pain and other circumstances that may be useful for patients,” he said, adding that he voted in favor of an amendment to protect medical cannabis states from federal interference. Hoyer more recently cast a vote for a measure that extends that protection to all legal marijuana states, though his letter does not mention it.

He also said he was in favor of Maryland’s decision to decriminalize marijuana possession in 2014, “as I do believe that there are too many non-violent offenders suffering in prison from a criminal conviction over possession.”

When Baltimore Mayor Kurt Schmoke (D) first floated the idea of legalizing drugs as a means to curb drug-related violence and other issues related to prohibition in the late 1980s, Hoyer wrote that he was was “initially amenable” to cannabis legalization.

But in the decades since, he’s backpedalled—apparently so much so that he’s offering an argument against legalization in 2019 that even staunch prohibitionists have begun to distance themselves from.

“I still have concerns on this after speaking to people who deal with drug abuse and rehabilitation issues and particularly after learning of the drug’s harmful consequences as a threshold drug that leads to the use of harder, very harmful drugs,” Hoyer wrote, using alternative language to describe the widely criticized gateway drug theory.

Evidence doesn’t bear out the gateway theory, as it ignores the fact that marijuana is the most widely used illicit substance and would therefore logically be one of the first drugs that a person uses in many cases. It also conflates causation with correlation, as the same principle could be used to argue that any commonly used drug like nicotine or alcohol leads people to use substances like heroin or cocaine.

What’s more, a growing body of research has demonstrated that for some people, cannabis serves as an offramp, used as an alternative to addictive prescription medications and illicit drugs.

“Rep. Hoyer is showing himself to be a relic of a bygone era who is far out of touch with the majority of Americans on marijuana policy,” Erik Altieri, executive director of NORML, told Marijuana Moment. “Marijuana legalization and regulation has been proven, in the real world not in Hoyer’s imaginary one, to lead to a decrease in youth use and to help people struggling with opioid addiction.”

“By sticking to the long debunked myth of marijuana as a gateway drug, Hoyer is denying actual science and failing his constituents by advancing talking points straight from the Reefer Madness era,” Altieri said. “It is time he joined the rest of us on the right side of history or for his district to find new representation.” 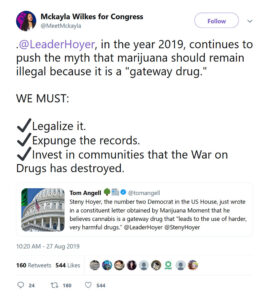 Hoyer made similar remarks last year, acknowledging that voters are largely in favor of legalization and that it “probably makes sense” but stating that he’s “not so sure that it’s not a gateway drug to using other drugs.”

Robert Capecchi, the constituent who wrote to Hoyer about legalization, told Marijuana Moment that he while he doesn’t dislike the congressman and voted for him, “it’s incredibly disappointing to see opposition to cannabis policy reform—beyond accommodating medical cannabis laws—based on the debunked ‘gate-way theory,’ especially from one of the most senior members of Democratic Leadership.”

“I sincerely hope that Rep. Hoyer and other members of the House Democratic Leadership team take a page from their Judiciary Chair and start taking the need to reform our failed federal marijuana laws with the seriousness it deserves,” Capecchi wrote, referencing legislation Rep. Jerrold Nadler (D-NY) introduced last month to federally deschedule cannabis.

Other Democratic leaders in Congress such as Senate Minority Leader Chuck Schumer (D-NY) and House Democratic Caucus Chairman Hakeem Jeffries (D-NY) are also on board with reform plans, with the pair having introduced companion bills to remove cannabis from the Controlled Substances Act in May.

“This is not about use; people use and will continue to use cannabis regardless of federal law,” Capecchi said. “It’s about safety, it’s about equity, it’s about compassion, and it’s about responsible regulation and accurate education.”

At a time when numerous cannabis legalization bills are being filed and a majority of Democratic presidential candidates are vocally supporting broad reform, it’s unusual to see a party leader openly peddle what most consider an outdated and inaccurate theory, even if that position is couched in less familiar language (i.e. “threshold” versus “gateway”).

But it’s not entirely unheard of, as Rep. Elijah Cummings (D-MD), chairman of the House Oversight and Reform Committee, similarly subscribes to the gateway drug theory and didn’t shy away from saying so during an appearance on C-SPAN last year.

Thank you for your letter regarding the legalization of marijuana. I appreciate your taking the time to make me aware of your concerns on this important matter.

I support the legalization of medical marijuana, as I am aware that it does have an ameliorating effect on pain and other circumstances that may be useful for patients. In the past, I have voted for an amendment in the Commerce Justice and Science appropriations bill that would prevent the Federal Government from impeding on Maryland’s ability to implement its medical marijuana laws. I also supported the decision made by Governor O’Malley and the Maryland General Assembly in 2014 to decriminalize the possession of small amounts of marijuana in Maryland as I do believe that there are too many non-violent offenders suffering in prison from a criminal conviction over possession.

As you may know, I was initially amenable to the idea of the legalization of marijuana when Kurt Schmoke was Mayor of Baltimore and advocating for drug decriminalization. However, in the 30 years since, I still have concerns on this after speaking to people who deal with drug abuse and rehabilitation issues and particularly after learning of the drug’s harmful consequences as a threshold drug that leads to the use of harder, very harmful drugs.

Should legislation regarding the legalization of marijuana come before the full House of Representatives, please be assured that I will keep your thoughts in mind.

Thank you again for sharing your thoughts with me. I encourage you to visit my website at www.hoyer.house.gov. While there, you can sign up for the Hoyer Herald, access my voting record, and get information about important public issues. If I can be of further assistance, please do not hesitate to contact me.

With kindest regards, I am 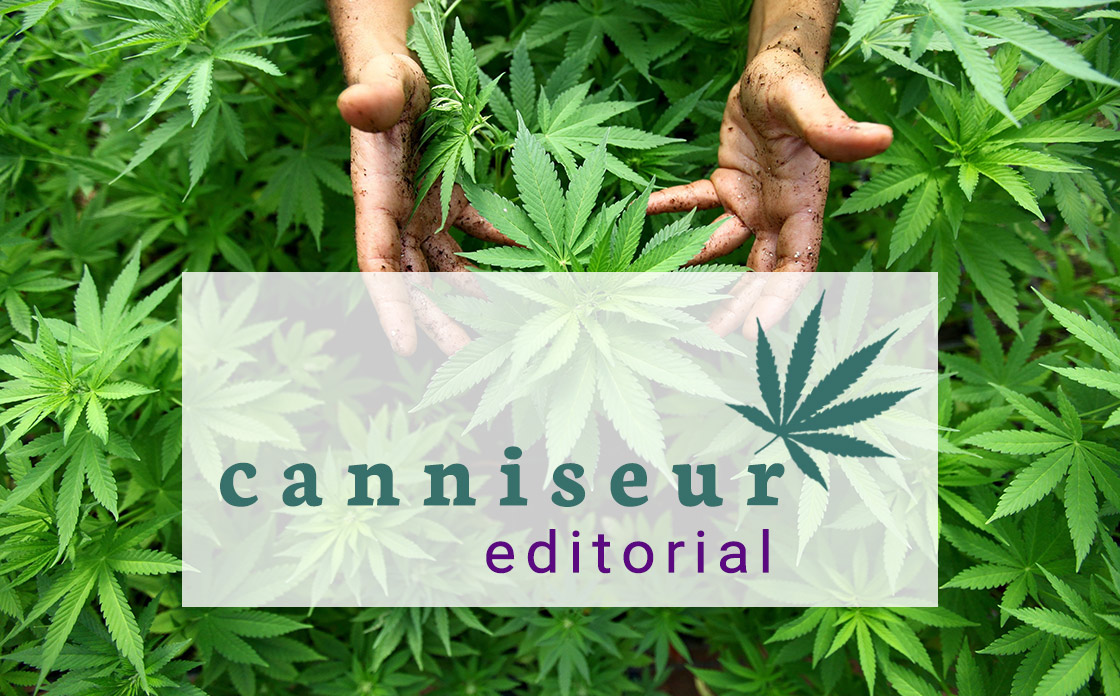 Get Cannabis Removed from Schedule 1