Breaking Down Shatter: What It Is, How It’s Made, How to Use It and More 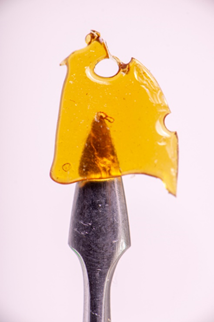 Original Article: Marijuana Times: Breaking Down Shatter: What It Is, How It’s Made, How to Use It and More

[Canniseur: If you consume concentrates, you should know what shatter is and how to use it. This story will explain everything. Enjoy the story, enjoy the shatter!]

The world of weed is wide and weird — and to newbies, there is no corner of cannabis culture stranger than that of concentrates. Cannabis concentrates can be hard or soft, clear or yellow, contain all cannabinoids and terpenes or just some. You can drop concentrates under your tongue, bake with them, wrap them into a joint or inhale them through a dab rig or vaporizer. Until you have experimented with concentrates, you will likely look at the whole lot of them with some degree of fear and confusion.

Instead of trying to tackle all concentrates at once, we are going to start with one of the most befuddling: shatter. How is this transparent, glass-like concentrate made, and more importantly, how are you supposed to use it? Read on to find out.

Shatter is a cannabis extract, which is a highly concentrated form of cannabis. Named for its brittle texture, which shatters like glass, shatter tends to be transparent with a slight amber hue, but more or less refined shatters can be more or less opaque and tinted.

Contrary to popular belief, shatter isn’t inherently more or less potent than other concentrates on the market, like wax or oil. Rather, it sits right in the middle of the extract spectrum, between raw oil on one side (products like Rick Simpson oil and FECO) and cannabis isolates on the other (pure THC or CBD powders). Shatters don’t contain much plant matter, but they do contain some, and while they usually have a high THC content, they often lack cannabinoids like CBD or CBG.

There are two inviting aspects of shatter: its ease of use and its cost. Unlike raw bud and some other concentrates, shatter allows you to maximize THC ingestion while minimizing lipid ingestion. Lipids are essentially fats within cannabis, which burn at a much higher temperature than other compounds within the bud. Thus, when you smoke raw flower, you usually incinerate flavorful terpenes long before you melt down the lipids. In the creation of shatter, lipids are eliminated, leaving only the good cannabinoids and terpenes, which can be inhaled at delightfully low temperatures. Plus, shatter is much, much more affordable than other extracts, especially isolates, and it isn’t messy to handle like less expensive extracts, like budder wax.

How Is Shatter Made?

Different manufacturers will employ slightly different extraction processes; for instance, Fuego Extracts has a proprietary blend and method that will differ from some other shatter brand. Still, here is the general procedure for manufacturing shatter:

How Do You Use Shatter?

Now for the fun part: consumption. There are four different ways to make good use of shatter:

If you are getting tired of the same old bud, you might give shatter a shot. Talk to reliable budtenders at your local dispensary to learn more about shatter dosing, so you can have a good trip your first time.

Disclaimer: This article is intended for information and entertainment purposes only and is not intended to reflect the specific views of the publication.

Original Article: Marijuana Times: Breaking Down Shatter: What It Is, How It’s Made, How to Use It and More