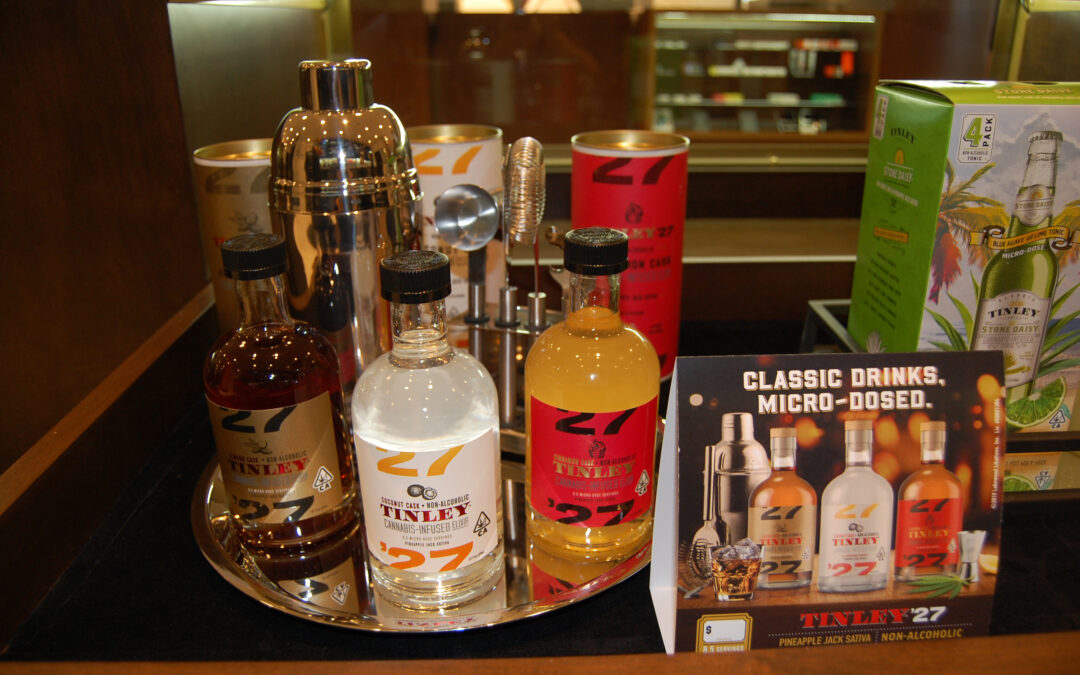 Original Post: CFN Media Group: Is 2020 Going to be the Year of the Infused Beverage Category?

[Canniseur: Cannabis infused beverages? Unless the makers of infused beverages can figure out how to make them taste decent, there won’t be much of a market… there’s no telling about taste! 🙂 Seriously, there are tons of problems to overcome with the taste of cannabis in beverages. I do wish them all the luck in the world on this venture.]

According to analysts, the space is forecasted to be worth over $5 billion globally by 2026. Positioned with one of the top bottling facilities in California and a gorgeous lineup of products is The Tinley Beverage Company(TNYBF:OTC) (TNY:CSE).

Tinley’s products have achieved the holy grail of non-alcoholic beverages inspired by the world’s most popular liquors and cocktails, all with a rapid-onset and a genuine full-flower sativa effect.  Low sugar, vegan, gluten free and kosher to boot.

To ensure that the “new” cannabis user sees these products, as well as generate mass retail revenue, the company is offering non-infused versions of its products in 150 BevMo liquor stores for “sober January”.  It also just announced trials with one of the country’s largest supermarket chains as well as with one of the largest warehouse-style store chains.  Adult-style, non-alcoholic beverages are one of the fastest-growing sectors within the overall beverage industry, with projections for the category growing at up to 39% annually for the next several years.

The third pillar of the company is its co-packing and overall infrastructure services for third-party beverage companies.  The Company is run by ex-Cott executives (Cott is a multi-billion beverage co-packer), so no doubt they’re working to create the same success in cannabis.  During the internet boom, it was the “picks and shovels” that wound up enduring best, so Tinley offers investors this opportunity as well.

Finally, the company has signed a deal to offer its products in the world’s second-largest cannabis market (after California), which is Canada.  With no less than Great North Distributors, which is the same exclusive sales force and distributor as Aphria (largest Canadian cannabis company by revenue) and Pasha Brands (craft cannabis company and investee of Aphria).

CFN Media sat down with Tinley Founder and CEO, Jeff Maser, and President of Western Business, Rick Gillis, at the MJ Micro Conference in Beverly Hills where they discussed the company’s history, their commitment to community, and how Tinley’s business model will take them straight to the top of the game.

CFN:  Tell us about Tinley? How was the company was conceived?

Jeff Maser:  I was at an after-work party, holding a cocktail, and said to myself, “Wouldn’t it be great if this could be a cannabis experience rather than an alcohol experience?  Healthier and a nicer experience, with no-hanger.

It was really that simple – the spark for Tinley.

That’s why our products are all modelled on popular cocktails and liquors including margarita, Moscow Mule, coconut rum, cinnamon whisky and Italian amaretto.

All are made by national-brand liquor formulators, and therefore use the same botanicals and flavors that are found in those products in bars.  They also replicate the dose – so a light high if you drink a bottle of the cocktail-style products, and the same light dose if you drink just a shot of the liquor-style products.  If you want a stronger effect, you can drink more, just like with alcohol.

CFN:  How does your background give you an edge?

JM:  I started my career at Cott, which at the time was the third largest beverage company in the world.  It’s a wildly successful co-packer, largely due to a unique strategy of creating new clients by getting known consumer brands into the beverage business.  They got Virgin to create Virgin Cola, Safeway to create Safeway Select Cola, as two prominent examples.

I felt the opportunity in cannabis was clear – create the “Cott of cannabis”.  It was a massive success in mainstream beverage, so the same would no doubt be possible in the cannabis beverage industry.  I recruited former Cott executives – one of the leading ones helped with the seed round – and began building the foundations of the same business model.

As an entrepreneur, I’ve always felt its important to surround the company with highly experienced executives in adjacent categories.  So in addition to bringing in the Cott folks, we also brought in who is perhaps the biggest resume in cannabis in a full-time role: Rick Gillis.  Rick was previously General Manager of Coca Cola Enterprises in the Southwest USA, a $2 billion business line.  Subsequent to that he was president of Young’s Market Company, the second-largest alcohol distributor in the Western USA, with thousands of employees and $3 billion in revenue.  So he knows beverage.

Rick Gillis:  I’ve spent my entire career bringing products to market and pondering how to catch the attention of the consumer the second they walk into any retail store. It has everything to do with one’s ability to execute seamlessly and be the trusted advisor for the customer. If you think about cannabis, we’re in the early stages of exploiting the cannabis-infused beverages category, which is new in itself.

So you could think about business in California, one that is rapidly approaching $4 billion in revenue, with a bottleneck of only about 600 physical points of availability to get to the consumer. So our efforts are now focused on exploiting our ability to have our products come to life in said points and that has everything to do with our logistics capability.

Not only are we a contract manufacturer (we make high quality, low cost products for third-party beverage companies), we’re the entry point for many to come into cannabis, and we want to be responsible for helping build what is now about a percent of the industry to something that is predicted to be somewhere close to 30% within the next few years (suggesting a $1.5 billion category in California alone).

CFN:  You recently signed a major distribution deal with BevMo to bring non-infused products to mainstream shelves. Tell us about that?

JM:  When we do marketing events, we give out non-medicated versions of all of our drinks.  At almost every event consumers ask if they can buy the products without cannabis as well, for times when they just want to stay completely sober.  Turns out this is a massive trend, with bars, restaurants and liquor stores across the country – and especially in California – aggressively expanding their lineup of adult-style beverages for people who don’t want alcohol.  It’s often referred to as the “sober curious” movement.  We caught the attention of BevMo, the most prominent liquor chains on the West coast, which is positioning itself as a leader in this rapidly-growing category.  We struck a deal for 150 stores, and this gives our cannabis brand huge mainstream visibility as well as a mass retail source of revenue.

CFN:  How does the deal with Great North increase market penetration in Canada?

JM:  Great North is an affiliate company of Southern Glazer’s Wine and Spirits. Southern Glazer’s is the largest wine and spirits distributor in North America. Its Canadian division has an affiliate company called Great North that does cannabis distribution in Canada, because cannabis wholesaling is run by the government liquor boards. They’re also the exclusive distributor for Aphria, which is one of the largest licensed producers in Canada.

CFN:  What does the addition of former NBA player Baron Davis to your advisory board mean for your marketing and distribution strategies?

JM:  Baron was one of the early investors in Vitaminwater®, and more importantly he took an active role in helping drive its brand awareness.  He’s been in a Pepsi ad campaign as well.  It’s not a spokesperson deal (although he’s speaking about us on Fox Sports radio today at 6pm Pacific), it’s him actually joining the company as an advisor to help drive product development, bring in co-packing brands, and help with marketing.

CFN:  Your products seem to be socially-conscious, in addition to tasting good.  How so?

RG:  The ethos of our company is to care about people’s health and, as a former medical collective, to continue to support the longstanding cannabis community in California.  Our products are vegan, gluten-free, Kosher and have a fraction of the sugar of their alcoholic-counterparts as well as many classic cannabis drinks.

Also, given our products are fast-acting, consumers are able to have more control over their dosing levels, because they can adjust their drinking pace and quantity in near real-time.  This differs from classic edibles where consumers don’t feel the effect for about an hour, thereby often not knowing when to stop eating or drinking until it’s too late.

We’re also proud to source all our cannabis from smaller growers in the Emerald Triangle.  It’s not only seen as the best, but we’ve had to endure the challenges in transforming from a small medical collective in 2016 to the various new legal licensing regulations that have been implemented since then.  Therefore, we feel a certain kinship with other companies that have had to do the same during this period, and want to support wherever possible.

CFN:  What else should our readers know about Tinley?

JM:  At present, we have the distinction of being the only publicly-traded, pure-play cannabis beverage company in the US.  There’s a lot of great companies out there that have beverages in market, however most aren’t public, and we offer a way to access this fast-growing company not only in the public markets, but in a way that’s not involved in other cannabis categories, and is diversified with branded and infrastructure products and services.So anyone who believes the cannabis beverage category will grow gets an efficient, diversified, pure play vehicle – managed by ex-President and C-level beverage execs – that trades publicly.  At a moment when we’re at an inflection point.  Our products just launched this Spring, and are really catching on well with consumers.  It can take more than 90 days to get paid, and we only recognize revenue when we’re paid (as opposed to when we sell or ship the product).  So a lot of the inventory showing on our books has in fact been sold, both by us as well as in many cases by the store to the consumer.  It therefore takes a bit of reading between the lines between our inventory size, including raw goods destined for production after the quarter for replenishment, to see how rapidly our products are being adopted, especially for a new product in a new category.  These numbers will become easier as we grow and are able to shorten our selling terms.

We’re at an infection point in customer adoption, co-packing deals, territorial expansion, and channel expansion to mass retail.  We’ve therefore begun to prove ourselves in these areas, and more and more of these developments will be announced as we sign them in the weeks and quarters to come.

The post Is 2020 going to be the year of the infused beverage category? appeared first on CannabisFN.

Original Post: CFN Media Group: Is 2020 Going to be the Year of the Infused Beverage Category?