Ed Note: End of life is a touchy subject for all of us. It’s difficult, perhaps for the family more than the one who is passing. But if cannabis can make passing from this life easier, then we’re all for it. Difficulties notwithstanding, it would seem like a good thing for hospice patients.

While medical and recreational cannabis are currently legal in 33 U.S. states and the nation’s capital, it still remains illegal at the federal level, fostering fears of punishment for professionals within the medical establishment who may want to prescribe cannabis as a medication. Cannabis’ federal illegality not only deters discussions between doctors and patients seeking relief for various ailments, but it also greatly limits scientific research that could help assist medical experts seeking to determine cannabis’ efficacy as a treatment for certain disorders. Hospice patients and those receiving end-of-life care — a group who could arguably greatly benefit from medicinal cannabis use — are often times uninformed about the plant’s therapeutic properties, because their doctors, nurses, and other medical staffers are often hesitant to speak with patients about the advantages and risks of consuming cannabis.

“As an administrator, I can tell you it’s not that we’re not allowed to talk about the use of cannabis, but there’s a fear that the federal funding [Medicare and Social Security] could be pulled, so we just don’t know what we can and can’t talk about. But as a nurse, I feel it’s our duty to advocate for any healing measure for the patient,” says Lance Pool, the main Registered Nurse at Stoneybrook Assisted Living in Corvallis, Oregon. “I’d fear losing my job if I spoke about it… many places I’ve worked would terminate you on the spot if you spoke about cannabis use.”

Lance and Cydney Pool of Treewise Holistic Nursing Services; photo by the author

Armed with a desire to create change in their fields, Lance and his wife Cydney, who is a death doula (someone who assists individuals and their families in the dying process by offering physical, mental, and emotional support, similar to a birth doula), created Treewise Holistic Nursing Services, a company designed to meet the needs of elderly patients and those seeking end-of-life care with the help of cannabis as medicine. “Some of my friends who are administrators in nursing homes and assisted living [facilities] said what they really needed was an outside consultant who they could refer people who have questions about cannabis to… so that’s how Treewise got started,” says Pool. “There are a lot of elderly folks who have questions, and we’re there to answer them as an outside source.”

Treewise offers private consultation to senior citizens who are curious about or need help using cannabis for various ailments. “State regulation requires that the facilities provide for the ‘holistic’ needs of their residents… There are several ways that facilities can [do that with cannabis medications]: they can assign a “caregiver” to visit the dispensary for their residents, [or] the dispensary can “deliver” to the facility. We are licensed as a patient and [a] grower, so we can provide any of these services,” explains Pool. Although they do not sell cannabis to patients, they assist in administering it, advising, and coordinating care and communication between patients and their caregivers. “We are new to Oregon, so we are building a client base and growing our own medicine,” says Pool. “It is nice to be in a legal state where our professional licenses are relatively safe. Federal prohibition has never held us back — we are doing exactly what we want to do and always have, but federal prohibition is holding our elders back from the ‘holistic’ benefits of nature’s medicine.”

Jennifer Rosenthal Iverson, an attorney specializing in medical marijuana in Monterey, California, explains why assisted living facilities may be apprehensive to get on board with medical marijuana despite it being legal at the state level since 1996: “In California, any entity receiving federal funding is concerned because [cannabis] it’s still a Schedule I narcotic. The fear or notion that the federal government will come after an assisted living place is very far off, but if someone is receiving federal subsidies, it would be a concern.” Many hospice companies run into the same dilemmas as nursing facilities — patients who are anxious, in pain, and lacking an appetite who could potentially benefit from cannabis as medicine — and an inability to speak about cannabis for fear of reprimand or loss of federal Medicare and Social Security funding. 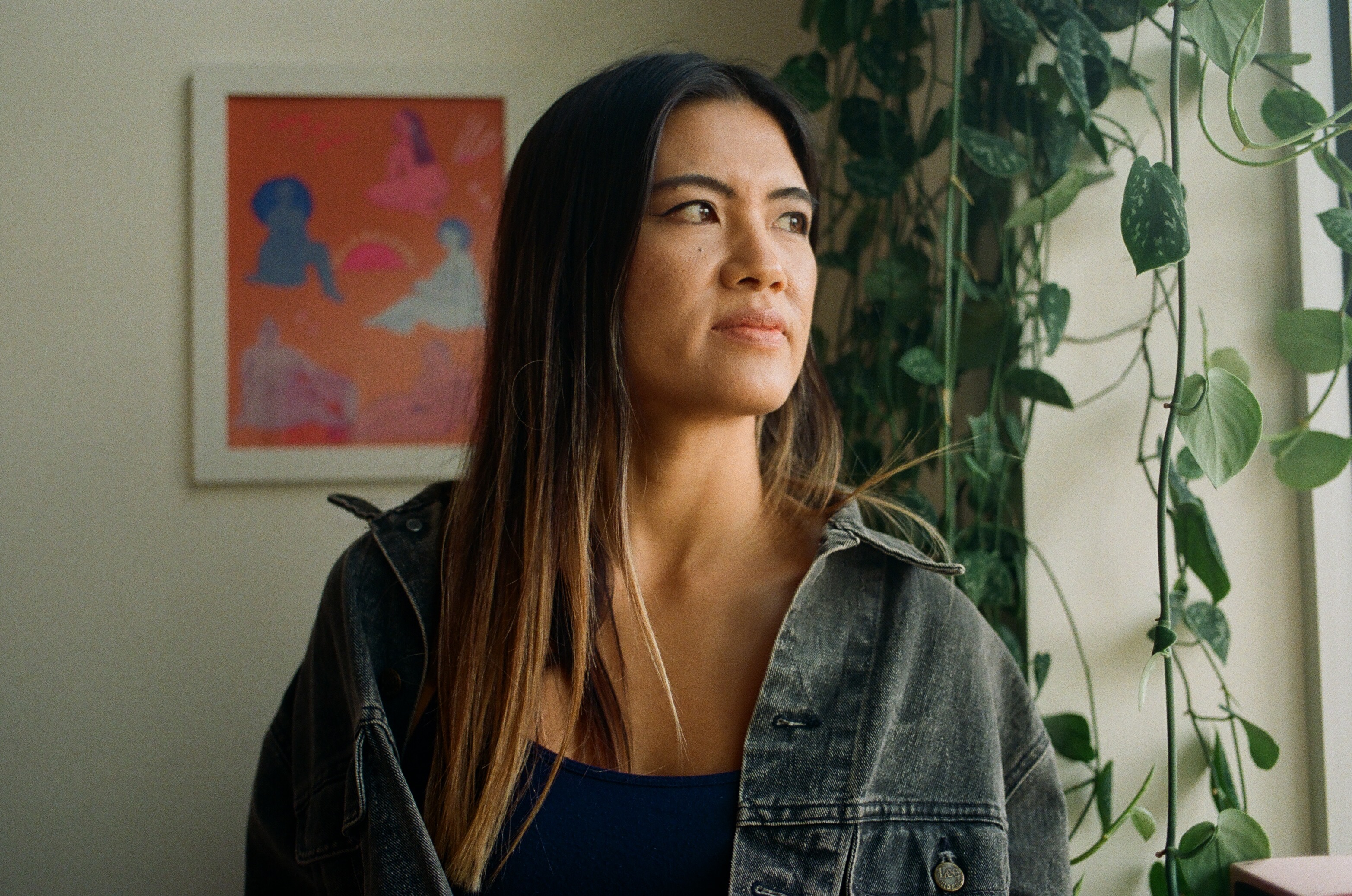 T Ngu, a hospice volunteer; photo by the author

T Ngu, the owner of Project Object in Portland, Oregon, has been volunteering for a hospice organization for five years. “One of the families was very involved in the medication process. They really wanted to know what the medication was doing, how it was affecting them, and what the side effects are,” says T.  “It was very apparent that many of the medications made [the patient] feel anxious, have hallucinations, or made them feel worse, so they needed other medications to help with those side effects. Then they started giving their loved one cannabis-based products. They tried tinctures and she didn’t like the taste, so they started giving her marijuana chocolates. It was really apparent that when she had the chocolates, she was happier, would laugh, make jokes, was a little more present, and had less pain. When she wasn’t on them, she would scream and be more anxious and uneasy.” T is aware of the benefits of cannabis-based products, but doesn’t speak about the medication with hospice patients and their families because it’s against the hospice company’s policy.

With staffers at assisted living, nursing home, and hospice facilities uneasy about discussing medicinal cannabis use, families with loved ones receiving end of life care are left to their own devices — often times led by a younger member of their family who discovered the benefits of such products on their own.

James Lumis, a Portland resident whose mother recently passed away, was reminded of the possible benefits of giving his mother cannabis during her time in hospice by his nephew. “He had some [edibles, which he’d made himself with recreational marijuana], so I asked my mom if she was open to trying it so she could eat, and she was,” explained Lumis. Not only did the cannabis products help his mother’s appetite, but they seemed to relieve painful constipation caused by her prescription painkillers, while easing her anxiety and diminishing her pain. Due to a lack of research and resources to consult regarding proper dosages and strain types, James tested the products on himself before giving them to his mother. “I didn’t give her anything until I tried it. I was her guinea pig,” he adds. 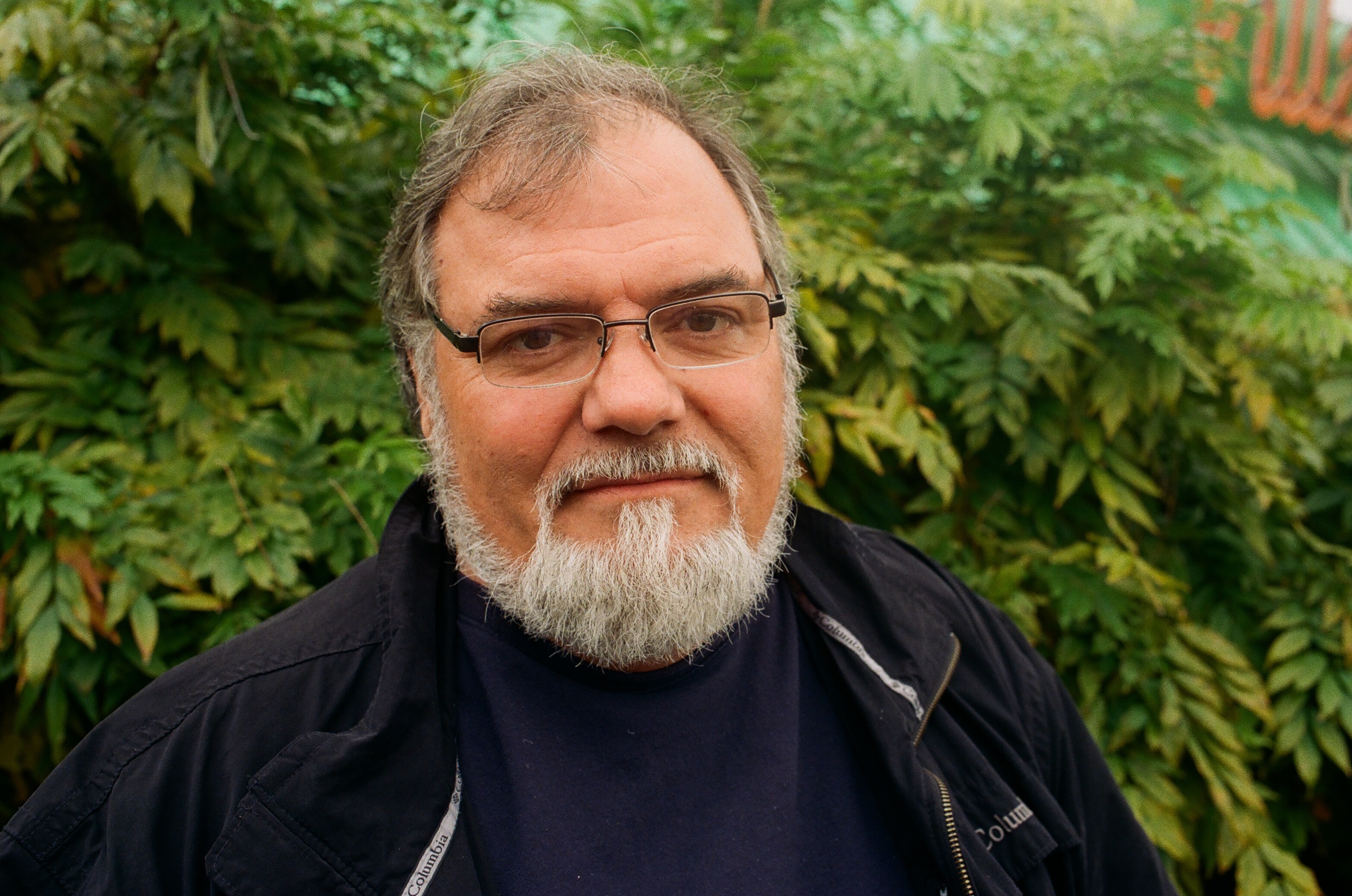 James Lumis of Portland, Oregon; photo by the author

“If cannabis was federally legal, I feel like I would have had more information when I needed it,” says Lumis. Cannabis’ federal illegality not only deters care providers from prescribing cannabis-based products, but it also results in a lack of reliable research, as many U.S. institutions have been dissuaded by the plant’s controlled legal status. With Canada’s newly adopted cannabis policies, physicians have expressed excitement about the scientific findings expected to come from a country now free of many previous restrictions on marijuana studies.

Dr. Allan Frankel, a physician based in Santa Monica, California, recognizes the lack of resources surrounding cannabis dosing recommendations for hospice patients and those in need of end-of-life care. Dr. Frankel, who says he cured himself of a debilitating viral chest infection by using cannabis, offers in-office and phone consultations for patients who are seeking more information on medicinal marijuana — a service that James Lumis and his mother likely could have benefited from. “I think the odds of the federal government stepping in on an 85-year-old lady, who’s on death’s door getting some relief in a legal state from cannabis, are slim,” says Dr. Frankel.

As far as potential consequences of doctors in California prescribing medical cannabis, attorney Iverson says that if the federal government wanted to get involved, a revocation of medical license would be the worst case scenario; “But that decision is really on a state by state basis… I haven’t heard of any cases in California where there’s been reprimand for this… But then, there aren’t many doctors that will do it.“ 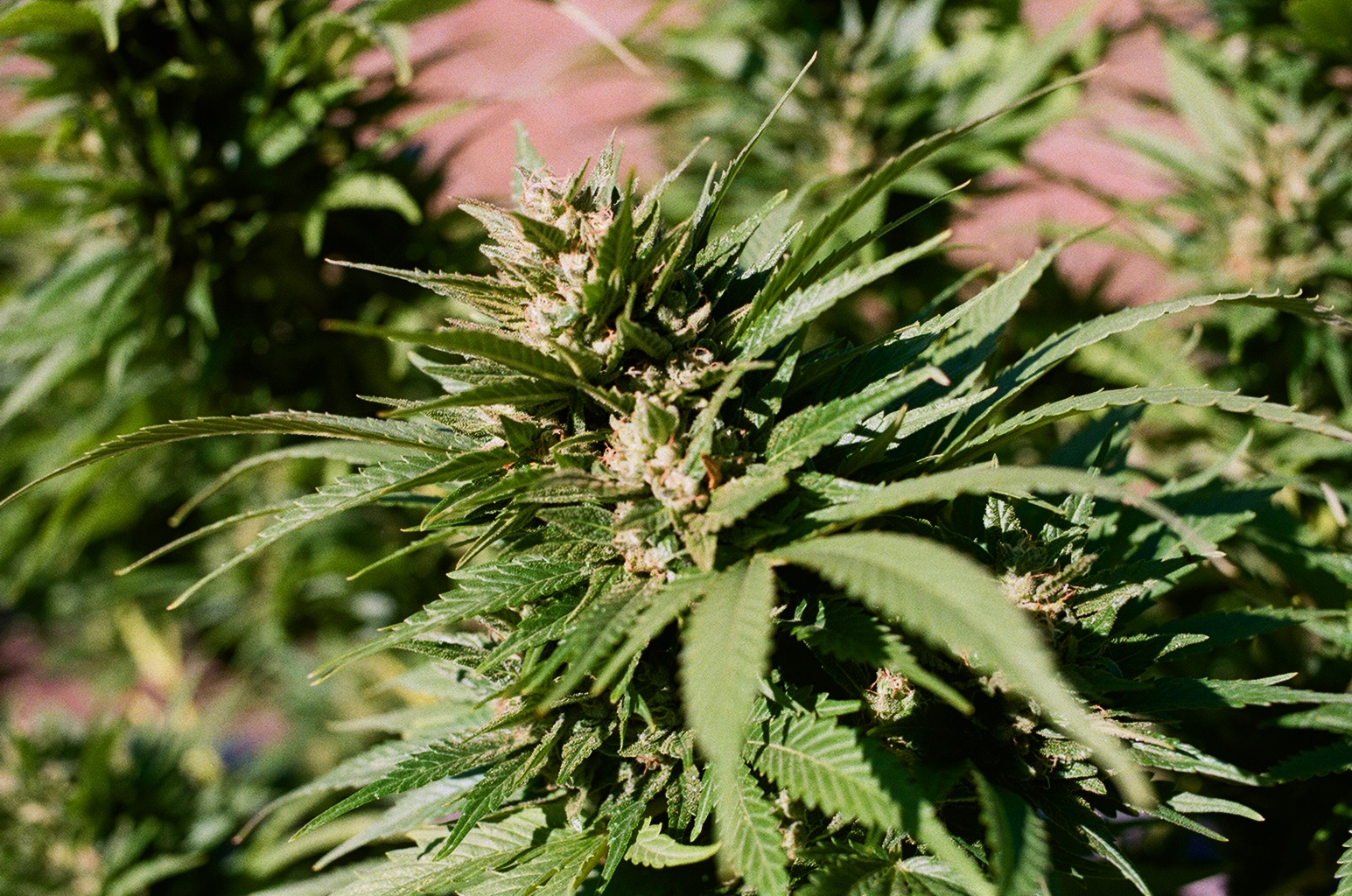 One of Lance and Cydney Pool’s homegrown cannabis plants; photo by the author

Dale Gieringer, the director of California’s branch of NORML (the National Organization for the Reform of Marijuana Laws), has been on the front lines of cannabis legal reform long before the Golden State’s passage of Proposition 215 in 1996 — the nation’s first medical marijuana law. Advocates battling HIV/AIDS (then an often terminal disease), along with senior citizens suffering from cancer, were instrumental in building support for California’s first medical cannabis program. However Gieringer explains to MERRY JANE that originally, “Prop 215 was in no way intended to be limited to terminal illnesses. Our opponents tried to paint it that way so as to limit its application, but we were very definitive about it being for any disorder for which marijuana provides relief.”

He foresees marijuana being legalized on a federal level in the near future: “Most of the [federal] legislation now is all-out legalization of some sort. I think the bill that has the best chance of approval is a bill called the STATES Act, which basically says that anything that’s legal under state marijuana laws will be considered legal under federal law.” Gieringer believes that after the presidential election in 2020, there’s a good chance the U.S. may see federal reform. “I’ve never been one to predict that legalization was just around the corner, but I can see it now… even the head of the [U.S. Food and Drug Administration], Scott Gottlieb, said that federal reform looks inevitable.”

Until then, medical professionals and caregivers for patients approaching the end of their lives will have to continue using their best judgment on how to navigate the remaining legal challenges around medicinal marijuana. Echoing nurse Lance Pool’s belief of doing what’s best for the patient, Dr. Frankel says, “We have to all be a little braver just to do the right thing. You decide what’s best for that patient in that moment, and you do it. If you do anything short of that, you’re not practicing according to [medical] code.” 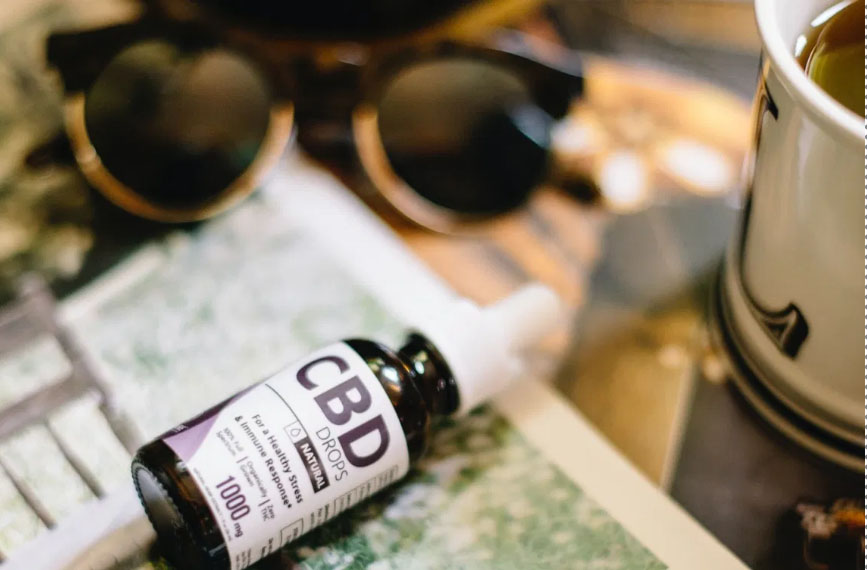 CBD Versus CBD with THC: What You Need to Know