This week’s Pura Vida Cultivar Review is for a purchase I made in Colorado. I got a chance to revisit Cannaco, on the south side of Trinidad, CO. This dispensary always has great products and I try to get there two or three times a year. This time I purchased some new (to me) strains and this one is called Pura Vida. Pura Vida seeds were developed by Bhodi, a seed company in the U.S. and the U.K. which probably explains why I’d never had this particular strain before. The grower wasn’t listed, so it’s unclear who actually grew the plant, but holy moley it’s complex. Pura Vida means pure life in Latin and I’d go along with that descriptive title for this cultivar.

The question mark in the title is because it’s a real hybrid…and it acts like neither Sativa or Indica, but does both really well! 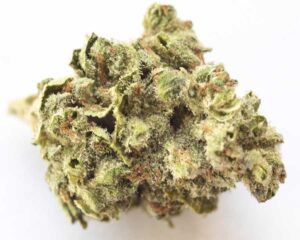 The Pura Vida buds I got were small. I almost never get a true cola from a dispensary, marginally compact, not too much so and has a good number of orange pistils and large flower sacs. The flowers are pretty to look at and weren’t overly trimmed, so there was a bit of small leaf still attached. When buds are this size, there’s not a lot that makes them different from strain to strain. These buds were light green in color and had lots of trichomes frosting the bud.

Here’s where Pura Vida begins to shine. The aroma has a nice limonene scent at the beginning, but the myrcene shins through the aroma very nicely, thank you. There are notes of pineapple and perhaps an aroma that reminded me of the color violet as well. Pura Vida has a very complex aroma for cannabis and I really liked it a lot. I just kept my nose in it for a while and let the aromas overtake my senses. It was heady and promised a wonderful effect. I wasn’t disappointed.

I rarely think the aroma and taste go together, but this particular cultivar had it going all over. It had a sweet foretaste that also had some violet in it. The middle taste as I was inhaling, was rich, pleasant and smooth. I can’t say enough about the smoothness of the taste. It was full-bodied, filled up my mouth with an array of wonderful flavors and tasted very little of plant matter. The ash was white, so it was well cured.

The effect is where Pura Vida really shined. Interestingly, Pura Vida is called Sativa on some websites and it’s labeled Indica on other sites. In all probability, it’s a hybrid and it surely was a hybrid to me. In New Mexico, I’ve been hiking about 5-9 miles a day. Sometimes less, but rarely more. I’ve got good boots, but at the end of a hike, my feet can be tired along with my right knee. The first puff almost instantly alleviated the soreness in my body parts! That was amazing. After that, the mind effect took over in about 3 or 4 minutes.

For my Pura Vida cultivar review the first words that came to mind as the effect started were; clarity and concentration. I felt I was suddenly able to concentrate more than I had been before consuming Pura Vida. It made me feel alive with thoughts. This part of the effect lasted for about 1/2 hour or so and then the Indica part of the effect kicked in big time. WOW!!! At about the 30-minute mark, my body started to feel like every muscle was in relaxation mode while leaving the energized mind part going. It was just a terrific feeling. At the one hour mark, I started feeling noticeably unwound and the cares of the day disappeared. This is one cannabis cultivar I’m going to go back to when I can find it again.

Pura Vida is a very impressive cultivar. It combined the best of Sativa and Indica in one plant. I don’t often find cultivars that have this kind of taste, effect and structure in the effect. I highly recommend this cultivar to anyone and everyone.