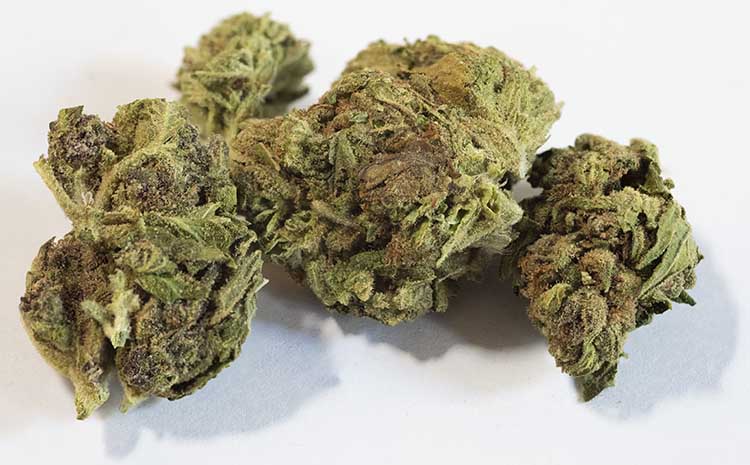 I’ve had Maui Waui before. Many times, but not in the last 15 to 20 years. The original spelling is what I wrote here. Some Maui Waui was purported to be actually grown on the island of Maui. Some was grown in California. But the word is Maui, not Mowie. It’s a large island in the Hawaiian island chain. Maui has always been maui…until now. I have frequently seen Waui spelled Wowie. Wowie, 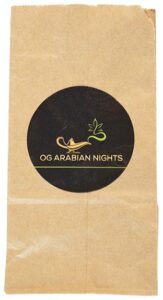 the original strain was spelled Waui. The strain I purchased was labeled “Mowie Wowie” and was purchased from a shop in Palm Springs, CA called OG Arabian Knights.

The Mowie Wowie I purchased was produced by a company called Dime Bag who claim that their product is all soil grown and organic. The flower could have been grown in soil, but was it grown indoors or outdoors? Hard to tell from their website. While I do  appreciate organic, it doesn’t matter as long as no pesticides and herbicides were used. What matters is the care it was grown with. What I don’t understand is their spelling of Maui Waui as Mowie Wowie. I can get the Wowie part for marketing and have frequently seen products with names that are supposed to mean something, but Maui Waui (or Wowie) was invented in Hawaii in the late 1970s.

There’s not a lot to differentiate this particular strain from many others. The buds had some bright green, usually not a great sign, but in this case it was OK; not too many orange stigma were visible, but that’s not an issue for me; there were also some darker reddish-brown areas scattered throughout. What is Maui Waui supposed to look like? I don’t know, but it was still pretty and I liked the way it looked. The flowers were fairly loose and it appeared to be grown without PGRs (Plant Growth Regulators), which is a good thing. 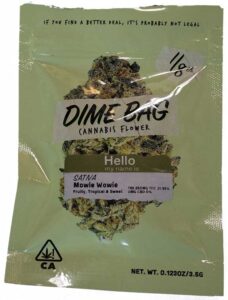 A word on the packaging. As you can see by this picture, the weed was delivered to me in a ‘hermetically’ sealed bag. I hate this packaging for several reasons. First, I can’t see the product. Second, It’s essentially a soft sided enclosure that can get crushed rendering the weed crumbled up. That said, this particular iteration of my ‘Dime Bag’ of pot was very much in tact in the bag and had a wonderful aroma to boot. I still don’t like it, but I also get it. If I was a grower and I wanted to protect my product, I might consider the exact same thing.

Holy Moley… … …or more aptly put WOWIE! This strain was packed with tropical fruit aromas like pineapple, skunky (a good thing) cannabis aromas and an unidentifiable aroma that just smelled…good. At first, I was kind of suspicious that the company that produced this product had added some terpenes to make it smell and taste better. After a while, I realized that all the aromas were part of the plant. i couldn’t keep my nose out of the bag it came in, it smelled that good. Was it because of added terpenes? I don’t know, but what was there I liked. A lot. I’d like to believe that the care Dime Bag took in drying and curing was what made the weed smell so wonderful.

The wonderful aromas did not entirely come through to the taste, in spite of the aromas strength. It did taste good and it was smooth as well. This tells me it was well dried and cured. The green color had nothing to do with the taste, which is a good thing. But it did taste ‘smoky’ at first. Usually the first toke of weed in my (glass) pipe has a lot of the flavors of the terpenes. Not this strain. The taste on the palate had some of the fruitiness of the aroma, but wasn’t as complex. I think the ‘smokiness’ of the flavor got in the way of the fruitiness of the aroma and didn’t translate.

This strain energized me. I felt like the energizer bunny. Creative. Focused. I wanted to clean my house, but I wasn’t at home. I wanted to draw and I did. I wanted to paint. I did. If there are strains that are sativa and indica, then this one falls squarely in the sativa category. It was ‘light’ very little body buzz and it allowed me to concentrate on my creative side. It was absolutely uplifting and if I was feeling any stress, the stress was gone. I felt like I wanted to be active and not lay around on the couch. This is a great strain for exercising or hiking. There are two minor downsides to the effect; First one is cottonmouth. I wanted to consume a lot of water…and I did! The second was dry-eye. My eyes just felt dry.

Would I buy this again, even in the packaging I hate? Absolutely. My only question is why don’t more growers produce this particular strain. It’s a terrific and uplifting strain that I haven’t seen for years. I hope that growers in other states decide that it’s worth a grow and I get to smoke it again soon. The overall score was dragged down by the packaging, but don’t let that stop you from buying this strain. It’s worth every penny. If it wasn’t for the packaging, I’d have given this strain a 93 or 94, as high as the Acapulco Gold I reviewed last year from The Green Room in Telluride. Maybe California growers are better than Colorado growers. I don’t think so, but you never know