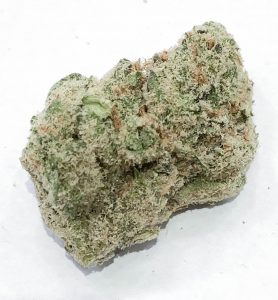 Tiger’s Milk is a “sativa” cultivar that I had never tried before. It’s called sativa by the High Valley Dispensary in Antonito, CO and a hybrid by Silver Peak, the grower. Doesn’t matter what it’s called as it has a really distinct and nice mental effect. And it’s lower in THC than many strains, clocking in at just over 14%, so you can control your buzz better. It doesn’t have much of a body effect, but what was there was very nice indeed. The uplifting mental effect was nice and lasted over several hours before becoming a bit heavy.

The nugs were fairly small, but not too small. There was a lot of frost (trichomes) all over the flowers including the little bits of stem. And there were lots of orange stigmas to see. It wasn’t overly trimmed, but I still would have liked to see more leaf. That’s me though.

Wow! If this was a wine, I’d call it a fruit bomb. In the wine world, a fruit bomb is a wine that has a massive aroma and taste. This started with a massive aroma of fresh fruit. I could not detect any pinene or other terpenes that are normal in this kind of sativa bud. Not in a bad way either. It had fruity aromas all over the place. I don’t believe I’ve ever smelled as fruity and luscious aroma as this. Silver Peak says on their site they’re in the business of growing exceptional cannabis. This one certainly was exceptional in the aroma.

The aromas came right through the taste. Perhaps the cure wasn’t long enough or it was too dry, but it was a bit harsh on the first toke. There was some coughing, but not a lot and it got mellower as it smoked down in the bowl. The taste went all the way through the process and you could still taste the delicious fruitiness in the exhalation and the fruity taste lingered for a while. In wine, this would be the finish and Tiger’s Milk had a pretty good finish. A few points lost for the harshness.

The Tiger’s Milk cultivar is called sativa by the dispensary and hybrid by Silver Peak. Since I don’t believe in sativa or indica as terms, the bud did have more of what I would call a ‘sativa’ effect. It was very uplifting. The mind effect was felt to almost have several nuanced layers in it. They were distinct from one another but worked together as a whole. Very uplifting and somewhat euphoric. And funny. Many things seemed humorous. There wasn’t much body effect until about 2 1/2 hours after smoking. Then it was just relaxing and maybe a bit sleepy. It was very easy and relaxing to laugh while under the influence.

The effect started about 3 or 4 minutes after we had our first toke. First, my mind felt relaxed and happy. Then my mind seemed to sharpen and the events of the day seemed humorous. It was a fairly focused effect and I liked it a lot.

I was impressed with Tiger’s Milk. It was excellent, and probably a ‘go back to’ based on the grower. I wasn’t happy happy with the way it was packaged, but it’s both expedient and cost-effective for dispensaries to sell it this way. It sure doesn’t help my storage situation though, since I have to get storage. or let you see and sometimes pick out the bud as you buy it. The dispensary did allow me to pick out the weed. Tiger’s Milk was grown by a very large company in Colorado. Silverpeak Cannabis, who are both retailers and growers. 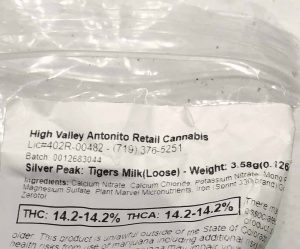 My only objection to this strain has nothing to do with the grower, but the package it was delivered in. This shop let me select the buds, but then put them in a plastic bag that they then stuffed into a ‘pharmacy’ container like a lot of dispensaries use. The advantage is the flower doesn’t get crushed. I like to crush (or grind) my flowers when I use them, not in the package thank you. Please dispensaries, if you’re listening stop using plastic bags. And especially stop using plastic bags and then stuffing them into a container.

Tiger’s Milk created a memorable effect. If you like a brain buzz, you’ll really enjoy this strain. If you want a strain that enhances creativity and gives lots of energy, Tiger’s Milk is that strain. A light session of 1 or 2 puffs will get your brain going for a few hours, but won’t give you that burst of creativity you might want.